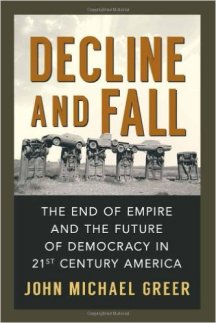 As we enter the final weeks of an extraordinary, brutal and at times profoundly depressing presidential election, very little has been said by either candidate, on the coming challenges facing America in the near future.

John Michael Greer has written a superb book on the coming collapse of the American global empire, a tottering giant with a stagnating economy increasingly dependent on manufactured “paper wealth”, exploding national debt and a military which for all its hi-tech brilliance, is heading towards a catastrophic defeat within the next decade.

As the foundations of America’s Imperial Age disintegrate, the world faces an even greater challenge, the decline and coming end of the “empire of time”, the exploitation of non-renewable resources like oil, coal and gas at an unsustainable rate, which I have covered in my post “winter is coming”. What the Washington elites fail to understand is that these two crises, the impending end of their global empire and the descent into the era of limits, will unfold at the same time.

Greer succinctly explains why the brittle American political and economic system is unprepared for this “perfect storm” which will impact America in the near future. Readers may note that I have used the term “Scarcity Industrialism” in the blog to explain the era which we are starting to transition to, a term which derives from John Michael Greer, in a number of blog posts. The issues raised by Greer have been discussed by governments around the world, in particular military circles, which are receptive of the national security risks of resource scarcity.

Few people are aware that the German military has also investigated the emerging era of resource scarcity, in particular oil, in a far-reaching report. As the magazine Spiegel notes, the report “…uses sometimes-dramatic language to depict the consequences of an irreversible depletion of raw materials. It warns of shifts in the global balance of power, of the formation of new relationships based on interdependency, of a decline in importance of the western industrial nations, of the “total collapse of the markets” and of serious political and economic crises.” Whilst the full report, at 112 pages, is a long read, it is worth reading to understand the multitude of challenges facing the industrial world. One can be sure that other similar reports are circulating among military and security policymakers around the world.

Greer considers that the most likely trigger for the end of American military and economic hegemony will be a military defeat, at some point, within the next decade. The US military is a formidable military machine but it is extremely dependent on hi-tech systems (GPS, satellites etc) that, if knocked out, would deal a devastating blow to its operational capabilities. The biggest weakness of the American military, its aircraft carrier fleet, is the means by which a military opponent can use asymmetrical warfare to cripple the American military. In Greer’s fictional novel “Twilight’s Last Gleaming”, these ideas are explored in a fast paced thriller, which I have recently reviewed.

The shattering impact of a military defeat would lead to the end of dollar hegemony, unleash a massive economic shock to the American economy and likely cause a systemic crisis within the American political system. The rise of Donald Trump is an early sign that the growing gulf between an increasingly pauperised Middle America and a tiny wealthy elite is leading to growing political instability. Should a significant section of the American electorate give up on the democratic process, they may turn to violence or rally behind a charismatic strongman who promises a return to the glory days of Abundant Industrialism.

The overall message from Greer’s book is that America is particularly vulnerable in the transition into the age of resource limits and will struggle to adapt to the coming end of its privileged status in the world economic order. Local communities are best advised to mitigate and adapt at a local level, as best they can, to the coming challenges as a bankrupt federal government will be unable to keep the many promises made during the golden years of abundance.

Whoever is elected the next president of the United States will have to start dealing with some of these challenges. The recent turmoil in the markets over the future of Deutsche Bank, the German banking giant, is a reminder that our western banking system is still very fragile and could relapse into a systemic crisis at any point. This is just one danger point in a world which is increasingly unstable and troubled.

I will be exploring some of the themes discussed in this book review over the course of the next few weeks, as well as publishing my final forecasting article on the likely outcome of the pivotal American presidential election, due on 8 November 2016.

Book review of Decline and Fall: The End of Empire and the Future of Democracy in 21st century America